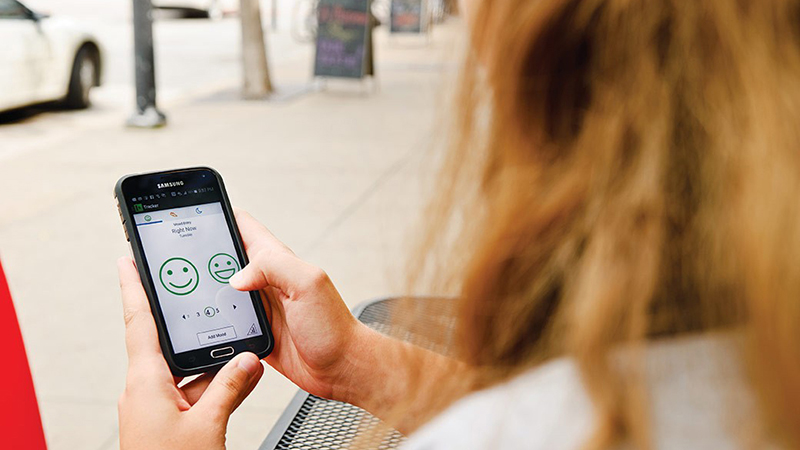 Patients with depression can keep track of their moods, sleep patterns and activity levels between appointments with the MoodTrek™ smartphone application. To log their moods, users simply select a "smiley face" icon to match their feelings.

Approximately 16 million American adults are affected by depression. However, many patients see a psychiatrist only once every two to three months. Recognizing that patients often forget how their moods vary between visits, a team from the University of Missouri, Missouri University of Science and Technology and the Tiger Institute for Health Innovation has developed a smartphone application that lets users log their moods and symptoms and share that data with their psychiatrists.

“Some patients keep a mood diary during their treatment, which can be helpful in assessing their well-being,” said Ganesh Gopalakrishna, MD, an assistant professor of psychiatry at the MU School of Medicine and a psychiatrist at MU Health Care. “But I thought that there must be a better way to record moods and activity. That led to the development of the MoodTrek™ app, which allows patients to log their moods, sleep patterns and activity levels between appointments. People tend to forget what their moods were like just a few days ago, but through this app, I can now see that data and can use it to provide the best care possible.”

Gopalakrishna worked with Sriram Chellappan, a computer science faculty member at Missouri S&T, to create the app. The two, along with Missouri S&T’s technology transfer and economic development staff, coordinated development of the app with the Tiger Institute.

The free MoodTrek™ app gives patients a sense of how they are doing on a daily basis. Behavioral health has been linked to factors such as a person’s sleep and exercise levels, and the app helps users recognize what affects their mood.

App users can record their moods on a scale of one to five by selecting the appropriate “smiley face” icon that matches their current feelings. By linking the app to a Fitbit activity tracker, users can integrate their sleep and exercise activity, which is then shared with their provider. If a patient is seen by a provider who uses a Cerner-developed electronic medical record, the information is uploaded instantaneously to their medical records. Users also can download reports of their mood, sleep and exercise activities to bring to their visits.

Kody Ihnat, a mathematics and physics student at the University of Missouri, began using MoodTrek™ in January 2015. Ihnat struggles with depression, but she has seen an improvement in her mental well-being since using the app. “I update my mood at least once a day,” Ihnat said. “It forces you to take time for self-analysis and really reflect to find out why you’re feeling the way you do.”

In addition to recording mood, sleep and activity, the app has a journaling feature that lets users record notes they can then share with their psychiatrists. The app also includes a helpline that can connect the user with the National Suicide Prevention Lifeline.

“My family is very much comforted by the fact that I have something in my pocket that is looking out for me and allows me to be in touch with my doctor,” Ihnat said. By understanding how activity, sleep and mood interact, both the patient and the provider can take steps toward better health.

“It’s helping you help yourself and helping the doctor help you,” Ihnat said. “I’ve certainly enjoyed using it, and I’ve definitely seen an improvement in my mood and mental state.”

MoodTrek™ is available for free on Android devices, with plans to bring the app to Apple devices.