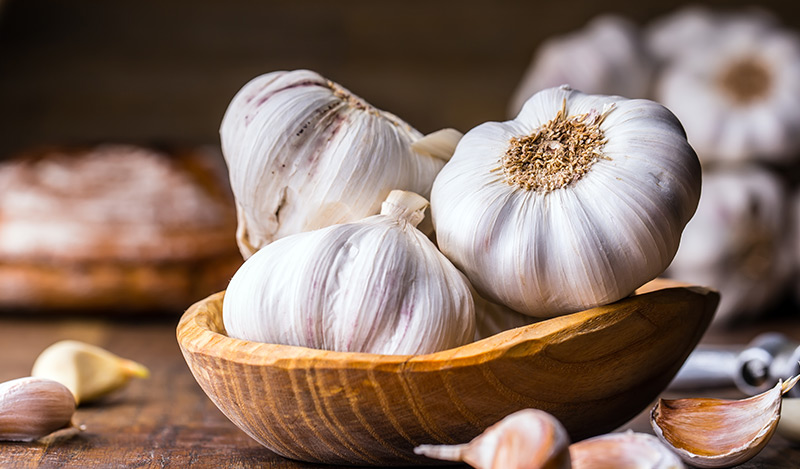 Another nod to garlic's reputation as a 'superfood'

A team of University of Missouri researchers has discovered that another nutrient in garlic offers the brain protection against aging and disease. The finding provides more understanding of how garlic may prevent age-related neurological diseases such as Alzheimer’s and Parkinson’s.

“Garlic is one of the most widely consumed dietary supplements,” said Zezong Gu, MD, PhD, associate professor of pathology and anatomical sciences at the MU School of Medicine and lead author of the study. “Most people think of it as a ‘superfood,’ because garlic’s sulfur-containing compounds are known as an excellent source of antioxidant and anti-inflammatory protection.

“Scientists are still discovering different ways garlic benefits the human body,” he said. “Our research focused on a carbohydrate derivative of garlic known as FruArg and the role this nutrient plays in protective responses.”

“Microglia are immune cells in the brain and spinal cord that are the first and main line of defense in the central nervous system,” Gu said. “Unlike other mature brain cells that seldom regenerate themselves, microglial cells respond to inflammation and environmental stresses by multiplying. By massing themselves and migrating toward an injury site, they are able to respond to inflammation and protect other brain cells from destruction.”

However, increasing the number of microglial cells won’t provide age-defying protection for the brain, Gu said. In fact, it can do more harm than good.

However, the nutrient FruArg may provide an answer to this reactive dilemma. By creating a cell model of neurological stress and monitoring microglial cell function, Gu’s team was able to study FruArg’s contribution to brain health.

“When stress was applied to the model, there was an expected increase in microglial cells and their byproduct, nitric oxide,” Gu said. “However, once we applied FruArg, the microglial cells adapted to the stress by reducing the amount of nitric oxide they produced. Additionally, FruArg promoted the production of antioxidants, which offered protective and healing benefits to other brain cells. This helps us understand how garlic benefits the brain by making it more resilient to the stress and inflammation associated with neurological diseases and aging.”

In the future, Gu and his colleagues hope to study the effects of FruArg on other cells in the body associated with conditions such as heart disease, diabetes and cancer.

The study, “Proteomic Analysis of the Effects of Aged Garlic Extract and its FruArg Component on Lipopolysaccharide-induced Neuroinflammatory Response in Microglial Cells,” was recently published by PLOS ONE, an international, peer-reviewed, open-access, online publication. The study was made possible by funding through the National Center for Complementary and Integrative Health, the National Institute of Environmental Health Sciences, the MU Department of Pathology and Anatomical Sciences, and the MU South African Education Program.