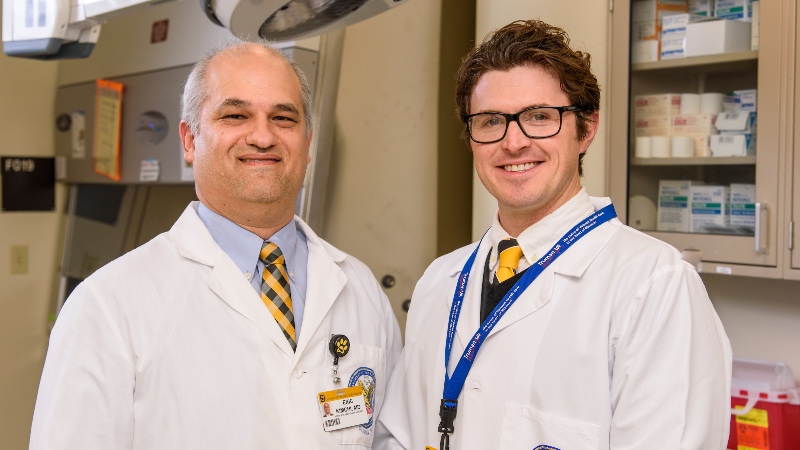 Eric Kimchi, MD, and Jonathan Mitchem, MD, recently received separate Department of Veterans Affairs research grants. Kimchi is exploring the role of a combination of therapies, including radiofrequency ablation, in the treatment of hepatocellular cancer.

As surgeons, Eric Kimchi, MD, and Jonathan Mitchem, MD, operate on cancer patients, including those at the Harry S. Truman Memorial Veterans’ Hospital. As researchers, they are trying to put their surgical selves out of business by discovering cures for cancer. And as friends, they are interested in seeing each other succeed.

Those worlds collided on July 20, when the Department of Veterans Affairs issued its notification of awards for Fall 2018.

“We were afraid to call each other in case the other guy didn’t get it,” Kimchi said. “Eventually we ended up talking and said, ‘Did you get any news today?’ ”

Both got good news.

Kimchi and his team received a VA Merit Award, worth more than $1.8 million over four years, to study the use of radio-frequency ablation combined with chemotherapy and immunotherapy to treat hepatocellular cancer. Mitchem and his team received a career-development award, worth $2.1 million over five years, to study how chemotherapy affects the immune response to cancer and how the immune system can be activated to maximize anti-tumor immunity in combination with chemotherapy.

These grants are examples of the symbiotic relationship between the MU School of Medicine and the Truman VA.

“It's a very competitive environment looking for federal funding and very difficult to find funding, so it’s important for investigators, especially clinician-investigators who are looking to build programs, to include the VA as well as the NIH in their program,” said Adam Whaley-Connell, DO, who is the associate chief of staff for research and development at the Truman VA as well as a professor of medicine at MU.

Whaley-Connell said there are 11 active VA grants involving MU School of Medicine faculty. Clinicians must have VA appointments to be eligible. Basic scientists can apply for eligibility.

“For my research — colorectal cancer — males over 50 years old make up a large proportion of the VA system, and they are a population affected,” Mitchem said. “The VA system treats about 10 percent of the U.S. colorectal cancer population. And the VA has some really cool research facilities we can take advantage of. They have an awesome biomolecular imaging center over there. We have an MRI and PET/CT available for mouse studies. This is fantastic for designing translational research studies.”

Kimchi’s team has two special weapons of its own creation for its project — a mouse model that accurately mimics the way liver cancer develops in humans and an ablation probe scaled from human to mouse size.

Radio-frequency ablation destroys tumors directly via a probe that emits radio waves. That releases proteins from the tumor that should be identified by the immune system as threats, prompting an attack on the tumor. However, the cancer previously had flipped the checkpoint switch, tricking the immune system into ignoring that particular antigen, which allowed the tumor to grow in the first place.

That’s where the other pieces come into play. Kimchi and his team have shown that sunitinib, a therapy that targets specific molecular receptors, attacks tumors and prevents tumor-induced immunotolerance. They’ve shown that a nanoliposome called LipC6 created by the University of Virginia’s Mark Kester, PhD — a research partner of the MU team — effectively delivers an additional treatment to the tumor. The last piece of the puzzle is resetting the checkpoint switch with a new class of drugs, checkpoint inhibitors. When the brakes are removed, the tumors in mice shrink or disappear.

“We’re kind of throwing the kitchen sink at these problems,” Kimchi said. “That’s a huge part of the grant. It’s not just, ‘Oh, we can make the tumors go away.’ It is, ‘What are the exact parts of the molecular pathways we are affecting, and can we refine our treatments even more?’ If you hit any pathway too early or too late, you might be missing out or you might be affecting too many different systems. By understanding the actual mechanisms that are being used to stimulate the immune system and destroy these tumor cells, we can develop better therapies.”

Mitchem’s project has some similarities to Kimchi’s, but the agents used to stimulate the immune system are different. One major problem facing the application of immune therapy in colorectal cancer is that colorectal tumors contain relatively few tumor-destroying T lymphocytes — the important T cells in an anti-tumor attack. Immunotherapy alone has not had widespread success as a treatment for colorectal cancer, because even if the immune system’s brakes are released through checkpoint inhibitors, the T cells aren’t there to attack the enemy.

Recent data from Mitchem’s lab and others have shown that FOLFOX — a potent combination of several chemotherapy drugs — kills colorectal cancer cells in a way that promotes inflammation in the tumor. That inflammation attracts more T cells, so the patient’s immune system can join the fight.

“One part of this is just having a bigger army,” Mitchem said. “The other part is making it a better army that is less likely to have its killing response evaded by the tumor. We’re looking at ways that chemotherapy can make the army not only bigger, but better. Then, taking the next step beyond, we look at how, by timing inflammation right, we can then activate cells in the tumor. As the cells are dying, we can ramp up the immune system and then try to jump on it, like a melee.

“Ultimately, the goal is to cure people without surgery. Doing that is probably going to involve multiple different modalities — chemotherapy, immune-based therapy, targeted therapy. Putting all those things together is key. That’s getting into personalized medicine, precision medicine.”

The concept of precision medicine — treatment tailored specifically to the individual patient based on his or her genetics, environment and lifestyle — is gaining traction at the University of Missouri. The university system has identified the proposed Translational Precision Medicine Complex as its top fundraising priority. The idea is to combine the brain power of researchers from the School of Medicine, the College of Veterinary Medicine, the College of Engineering and other disciplines under one roof to create breakthroughs that improve patient outcomes.

Kevin Staveley-O’Carroll, MD, PhD, the chair of the Department of Surgery and director of Ellis Fischel Cancer Center, said the VA connection is another important cog in what makes MU a potential research powerhouse. The VA hospital provides top-notch research facilities and a wealth of patients who benefit from the specialized expertise of clinicians and researchers that are part of the university and VA systems. These patients can participate in groundbreaking research and help find cures for cancer. In addition, the VA system offers another avenue for patients to receive care and for researchers as they also vie for NIH funding.

“This all ties together with the Translational Precision Medicine Complex we’re building. This unique research facility is a one-of-a-kind collaboration between the Harry S. Truman VA and the University of Missouri system,” said Staveley-O’Carroll, who has devoted decades of research into hepatocellular cancer alongside Kimchi and is a mentor to Mitchem. “These kinds of partnerships, which we haven’t historically had here in Columbia — and don’t exist in most places — allow us to provide state-of-the-art research and care to our veterans and to all Missourians.”