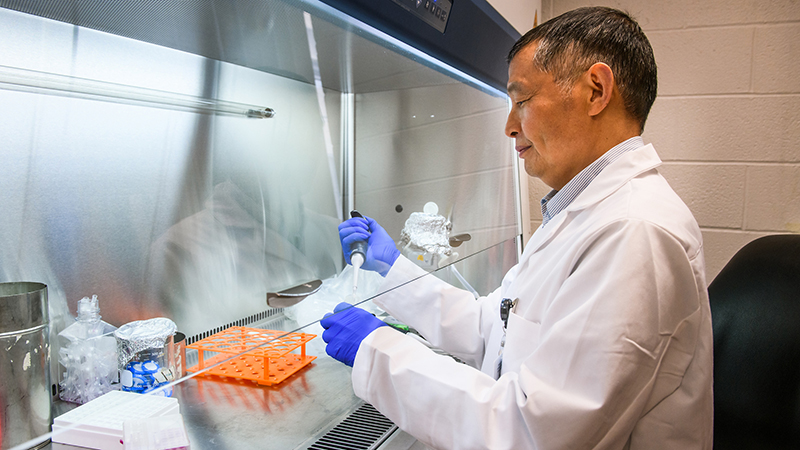 Shiyou Chen, DVM, PhD grew up with six siblings in a tiny mountain village in China during the Cultural Revolution, a period when basic resources were scarce. Rather than learning, Chen often would play at school in the morning and help with farming chores in the afternoon. As the country’s education system reformed in the mid-1970s, Chen was a seventh-grader who struggled with basic skills such as reading and writing.

“They gave everybody a test for their math level,” Chen said. “I got a zero.”

Despite his late start, Chen quickly realized the importance of education and took control of his narrative. Through self-discipline and innate curiosity, he began to catch up with his peers and develop a passion for science.

He went on to earn a doctorate in veterinary medicine and a PhD in virology. Since coming to the United States in 1996, Chen has become one of the nation’s experts on vascular smooth muscle tissue and the role it plays in heart and vascular diseases.

Chen joined the MU School of Medicine in September 2019 as the chief of the Department of Surgery’s new division of research. His job is to foster collaborations between MU’s surgeons and basic scientists, which aligns perfectly with the university system’s NextGen Precision Health Initiative.

“Our department spans all surgical specialties other than orthopaedics and otolaryngology, so we have ample opportunities for research collaborations,” said Kevin Staveley-O’Carroll, MD, PhD, MBA, the Hugh E. Stephenson Jr., MD, Chair of the Department of Surgery. “Our primary mission is to provide a high volume of high-quality surgery. Doing this well has allowed us to fuel our other missions of research and education.

“In research, our overarching goal is to form teams where we have researchers and clinicians paired together, ideally for multi-principal investigator grants. Dr. Chen is an impressive researcher, but more important, he’s an impressive person who has demonstrated the ability to lead, mentor and collaborate. That’s why we thought he’d be ideal for this role as the chief for the division of research.”

Chen, who spent the previous 11 years at the University of Georgia’s College of Veterinary Medicine, brought four active National Institutes of Health R01 grants worth more than $5.8 million over five years to MU. Chen’s project closest to the finish line is a drug that could be used to coat the stents that reopen narrowed arteries.

When a stent is placed in an artery, it can injure the thin inner wall of the vessel, called the endothelium. That triggers the vascular smooth muscle beneath the endothelium to grow and repair the wound, which narrows the artery again — a condition called restenosis. There are currently stent-coating drugs that block the regrowth of all cells. They prevent restenosis, but unfortunately don’t allow the wound to heal smoothly, so patients need to take blood thinners for at least one year to guard against blood clots forming.

Chen has identified a number of genes responsible for vascular smooth muscle growth. He is developing potential drugs that specifically block the abnormal regulation of these genes. The drugs prevent vascular smooth muscle cells from overgrowing while not suppressing the gene responsible for endothelial cell growth. That means the wounded artery can heal quickly and the patient doesn’t need to take blood thinners.

“This is exactly precision medicine,” Chen said. “There are many different causes of these heart and vascular diseases. You target one cause specifically, so if we found that some people have this gene defect, we can directly target it. We are also trying to identify biomarkers for these diseases so screening tools may be developed.”

Chen has applied for a patent for one of the potential drugs, which he has tested at the cellular level and on mice and rats. Because of his position with the Department of Surgery, he now has access to human artery tissue that is removed during procedures such as bypasses.

“He’s been very successful in mouse models dissecting out pathways that are important in the vascular system,” Staveley-O’Carroll said. “As he works with us and gets access to more clinical specimens, he’s better positioned to move his research forward into people. That’s what the NextGen Precision Health Initiative is all about, taking basic research and making it more relevant to people.

“We’ve got a lot of vascular diseases here in Missouri, and we have clinically excellent vascular and cardiovascular programs. Vascular disease is one of the strategic areas of the NextGen Precision Health Initiative. All of those things helped us attract someone of Dr. Chen’s caliber. Through programmatic recruitment and development like Dr. Chen’s, our department has increased its yearly NIH funding from $700,00 to $4.3 million, rising in the national rankings from 56th to 30th over the last five years. It certainly is an exciting time to be at the University of Missouri.”

The precision medicine currently offered at MU Health Care is part of a bigger initiative to make health care as personalized and effective as possible. With the upcoming opening of the NextGen Precision Health Institute, our researchers and doctors will be able to better understand diseases and conditions as they relate to an individual’s genetics, lifestyle and environment. With that level of understanding and the resources offered at the NextGen Institute, MU Health Care will be able to take discoveries even further, developing treatment and prevention strategies that not only save and improve lives in Missouri, but also can be shared to help others across the globe.