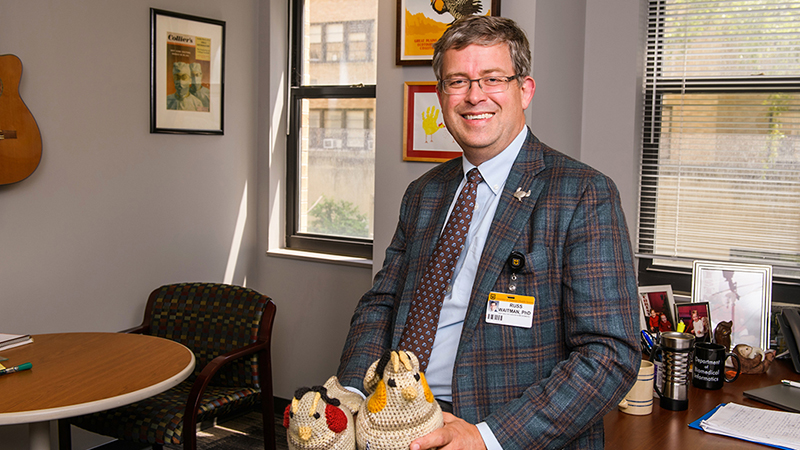 Two crocheted prairie chickens sit on the desk of Russ Waitman, PhD, at the MU School of Medicine. To explain the work he does, Waitman picks up one of the chickens and shakes its tailfeather. He describes the bird’s mating ritual, which amounts to an all-male dance contest — called a lek — that is judged by females.

“If you’re a male chicken dancing by yourself, the females won’t come,” Waitman said. “The male chickens have to dance with the group or they won’t get any female chickens. It’s a similar thing with research now. If you don’t figure out how to dance with other people, nobody is going to want to do business with you.”

Waitman is the University of Missouri’s new dance instructor. He specializes in helping researchers find, understand and share data with a wide network of collaborative partners.

Waitman has several official titles — including associate dean for informatics at the MU School of Medicine, director of health informatics for NextGen Precision Health and scientific director of the Tiger Institute for Health Innovation — but the bottom line is he was hired to make the four-campus UM System a bigger player in clinical medical research. Increased clinical research will mean more opportunities for patients to participate in research studies that could improve or save their lives. It will also mean more federal grant funding for the university and its researchers.

MU Executive Vice Chancellor for Health Affairs Rick Barohn, MD, calls Waitman a “transformational hire.” They worked together during a fertile decade for medical research at the University of Kansas.

“I’ve seen what he can do at a national level by taking the informatics pieces from the electronic health record and making them available to researchers and clinicians so they can take that data and ask some serious questions about how to fix diseases,” Barohn said “He’s a national guru in this field.”

Waitman, a joint hire of the MU and UMKC medical schools, believes in the University of Missouri’s potential, in part because of the increased commitment to research that’s evidenced by the NextGen Precision Health initiative. He also was intrigued by the university’s unique partnership with Cerner, the Kansas City-based health information technology company. He now has a direct working relationship — rather than a client-vendor relationship — with the company that provides the electronic health record for one-quarter of the nation’s hospitals.

“I see a big upside here in clinical research,” Waitman said. “That, in turn, will feed back to the basic science, because we’ll have more of a culture of research in our health care system that will make it more fertile for translational research from bench to bedside. When we open up how we do data and how we organize data, we’ve got big potential working with engineering, we’ve got a lot of potential working with Cerner and other medical innovators in industry. If we can show we’re a good partner, we have a lot of potential.”

Getting to Know Russ Waitman

The subject of better research through partnerships is a recurring theme for Waitman.

He’s been the principal investigator of Patient-Centered Outcomes Research Institute awards worth more than $20 million. These established the PCORnet Greater Plains Collaborative (GPC), a regional data-sharing network that has grown to 12 medical centers in nine states and is now based at MU. Researchers at any GPC member have access to secure health information from all of their partners, with a pool of more than 21 million patients.

“The ability to harness that data to improve health care delivery requires three key steps — first, developing data warehouses with common architectures that allows for linking data across multiple health systems; second, making the warehouse data accessible and usable for clinicians and investigators; and third, building the analytic capabilities to distill information from the data,” said Gary Rosenthal, MD, who represented the University of Iowa in the GPC and worked on the project with Waitman. “Russ saw the importance of pursuing this approach and was a master of putting the three pieces together. This area of research is increasingly important. Every major research institute and health system in the country is going to have to build large footprints in data science or they’re going to be left behind.”

The GPC logo includes a prairie chicken, a nod to Waitman’s analogy about group research. When Rosenthal left Iowa to become the chair of internal medicine at Wake Forest, Waitman gave him a parting gift from the Greater Plains Collaborative — a painting of a prairie chicken signed by representatives of the other GPC schools.

“It’s sitting in my office, and I get a lot of questions to tell the story about that chicken,” Rosenthal said.

Waitman is now teaching a new audience in Missouri how to do the big data dance.