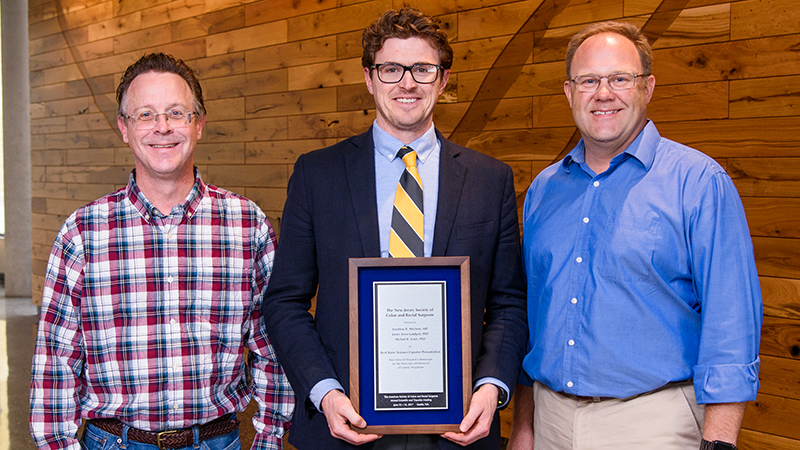 The University of Missouri research team of Michael Lewis, PhD, Jonathan Mitchem, MD, and James Amos-Landgraf, PhD, received a top award for basic science from the American Society of Colon and Rectal Surgeons.

In the darkness of a University of Missouri laboratory rat’s colon, a laser light show is providing scientists with information that could translate into earlier detection and more effective treatment of colon polyps. The research has the potential to prevent colorectal cancer and the need for surgical removal of a piece of patients’ colons.

A cross-campus team of MU researchers won a top award for basic science from the American Society of Colon and Rectal Surgeons at its national meeting in June. Jonathan Mitchem, MD, joined forces with James Amos-Landgraf, PhD, and Michael Lewis, PhD, of the College of Veterinary Medicine, on a study titled “Near Infrared Targeted Colonoscopy for the Detection and Removal of Colonic Neoplasms.”

Amos-Landgraf set the stage by developing a new rat model for colorectal cancer. Lewis designed the idea for the project. With his background in radiochemistry, Lewis obtained a fluorescent staining peptide called LS301 that binds to a protein active on the surface of neoplastic cells. Mitchem helped them create a relevant study that could translate to humans.

“I was like, ‘Hey, this is pretty interesting. Can I help you?’ I helped them with some of their research and put a clinical spin on this cool stuff they were already doing,” Mitchem said.

In the study, LS301 was applied topically to the colon of rats. When subjected to a near-infrared laser during colonoscopy, the glowing fluorescent stains were more prominent in polyps than normal cells. When the polyps were removed, they were confirmed in necropsy to contain cancer.

Mitchem said there are a few key points the researchers need to prove on rats before translating the science to humans. First, they want to ensure that the LS301 identifies not just the polyps but also the flat lesions that can develop into tumors. Second, they want to prove that the LS301 can dependably give surgeons a guideline for where the cancer ends and normal cells begin on the margins of a tumor, which could remove much of the guesswork from colorectal surgery.

Ideally, they would like a pill or intravenous delivery method for the LS301, so a patient would be prepped for the near-infrared scan before the colonoscopy begins.

“There is a specific need to be able to identify neoplasia and dysplastic lesions in the colon more effectively,” Mitchem said. “The other thing is to be able to assess the margin of resection for polyps in the colon when you remove them. Currently, we’re testing our ability to ensure negative margins in the rat model.”

The early returns are promising. In July, the team — with Lewis as the principal investigator and Amos-Landgraf and Mitchem as co-investigators — received a grant of more than $47,000 from the University of Missouri Research Board.