Nextgen Precision Health Is a Big Idea Whose Time Has Come 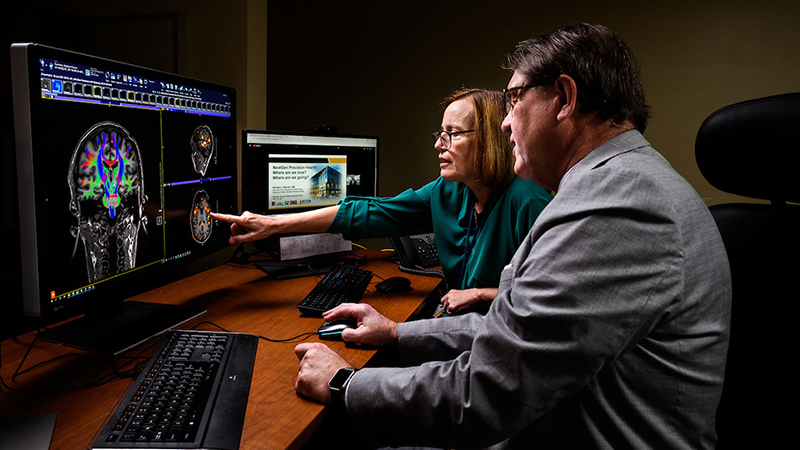 Soon after Talissa Altes, MD, took over as chair of the Department of Radiology in 2016, she started to hear about a big idea that would eventually become known as NextGen Precision Health.

“I didn’t expect it to ever happen,” Altes said. “I’ve been in academics long enough to be somewhat jaded about large initiatives like this.”

The NextGen Precision Health building, a 265,000-square-foot research facility, is set to open in October just east of University Hospital. The building is home base for a University of Missouri System initiative championed by President Mun Choi. It aims to harness the strengths of the university’s four campuses and its corporate partners to create health care innovations that have a real impact on the lives of people in Missouri and beyond.

One of the features of the NextGen building is an imaging core that includes a MAGNETOM Terra 7-Tesla MRI scanner. The 7T MRI— acquired through the university’s partnership with Siemens Healthineers — allows clinicians and researchers to see inside bodies with more than double the detail of standard 3T MRI scanners. Altes has used that super magnet to attract talented scientists, especially physicists who specialize in neuroimaging. After hiring one researcher in her department the previous four years, she added four in the span of six months.

“I’m the tail wagging the dog, because imaging is just a small piece of this whole initiative, but I’ve been able to hire a number of highly accomplished researchers who, in truth, we would not have been able to attract without this kind of equipment and the environment of the NextGen,” Altes said.

She grew animated when she discussed how her new hires will be force multipliers, bringing novel imaging techniques to share with MU students, trainees, scientists and clinicians. She explained how the new hires would advance their own NIH-funded research into cancer and dementia with the help of the 7T MRI, which reveals the workings of the brain with new clarity.

“Am I too enthusiastic?” Altes said with a laugh. “Sorry, but I love this stuff.”

Investing in the future

Altes isn’t alone in her enthusiasm. As the NextGen building has taken shape in the last two years, so have the School of Medicine’s plans to capitalize on the moment. Dean Steven Zweig, MD, called the current investment in research “the most ambitious growth plan in school history.”

To invest wisely, School of Medicine leaders created a research strategic plan that meshed with the goals of the NextGen initiative. The initial focus centered on cancer, cardiometabolic and neurologic diseases. The NextGen model has recently been expanded to two new areas — infectious diseases and reproduction/child health.

“We used the building, and the ideas behind the building, as ways of constellating enthusiasm and opportunity,” Zweig said. “Then we set up a strategic hiring plan to not only hire top-notch researchers for that space but also hire people who would work with them.”

Zweig called the hiring plan RISE-UP — an acronym for Research Investment Strategic Engagement University Partnerships — and the school is committing to hiring 30-40 new research-oriented faculty. The hires are being made in clusters to create teams of scientists who complement each other, such as Altes’ imaging experts.

Beyond the RISE-UP additions, several new leaders have joined the health system and will play key administrative roles in research.

First and foremost, Choi hired Richard Barohn, MD, as MU’s executive vice chancellor for health affairs and quickly tapped him as the executive scientific director of NextGen. Before coming to MU in 2020, Barohn spent two decades at the University of Kansas and was a key figure in the school’s explosive growth in medical research during that period. He led the team that earned KU a coveted NIH Clinical and Translational Science Award, a renewable five-year, $25 million grant.

“Drs. Waitman, Bartlett-Esquilant and Kumar have joined Dr. Bill Fay, our senior associate dean for research, so that we now have extensive leadership in the School of Medicine research office to cover the full spectrum of research,” Barohn said. “Their leadership covers everything from wet laboratory investigations to clinical trials to study outcomes and discovery work. All of our research deans will be involved in NextGen, both in the recruitment process for new talent and in creating the infrastructure in the School of Medicine to make sure all of our researchers can be successful.”

Additional support to help faculty complete translational research is important because the journey from lab discovery to clinical use can be a slog. There is often a wide gap between when the initial funding for basic science research ends and the potential funding for commercialization begins.

It has its own nickname: The Valley of Death.

“You write a paper. You write another paper. You present it at meetings. Maybe another group tries it,” Altes said. “It can take 20 years to get to patients, if it gets there at all.”

To accelerate the process, the NextGen building is designed to handle every step of the translational continuum, from laboratories to the Clinical Translational Science Unit to the Good Practice Manufacturing spaces for pilot-scale production of drugs and devices. Equally important, the building will foster the collaboration that’s at the heart of the NextGen initiative.

“My clinical radiologists will be sitting in the NextGen imaging facility, reading patient exams and talking to our researchers,” Altes said. “You’ll have the ability to have what some people call ‘collision science,’ where people from diverse scientific backgrounds get to know each other and solve difficult problems by combining their different viewpoints.

“And because we’re allied with Siemens, we’ll have a Siemens scientist on-site. If we develop a better way to image using the 7T MRI, their scientist can take it back to the company for potential inclusion on their next generation of products. In this way, the cycle from innovation to widespread clinical use potentially can be reduced from the typical 20 years to something much shorter.”

Once skeptical that the talk of NextGen Precision Health would become action, Altes now can’t contain her excitement about the possibilities ahead.

“All the key stakeholders developed a vision for what we at the University of Missouri could do well and what strengths could we build upon to have a big impact in precision health,” she said. “We have come up with a vision and executed that vision incredibly well for NextGen. Not many places have something like this.”