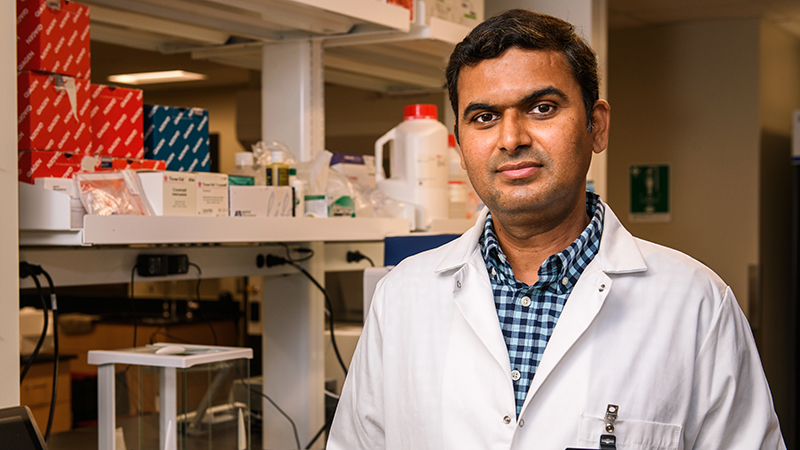 A University of Missouri School of Medicine scientist earned a $1.9 million grant to investigate how Zika virus can cause glaucoma in babies born from a mother infected during pregnancy and to test a potential drug to treat the condition.

In 2015, Zika virus caused an outbreak in North and South America affecting nearly 2 million people. The virus is transmitted by mosquitoes in tropical regions and typically causes a fever, rash or other mild symptoms in children and adults. It is also associated with an increased risk of abnormal brain development in unborn babies, which can lead to a significantly smaller head size, known as microcephaly. Several clinical studies have also linked Zika to multiple eye deformities at birth.

This study, led by Pawan Singh, PhD, assistant professor of ophthalmology, will study Zika virus infection in pregnant and neonatal mice to decipher the disease mechanisms and discover new ways to fight the virus.

“We know from clinical case studies that Zika has the ability to infect the eye, causing several issues with the retina,” Singh said. “We recently discovered that Zika-infected mice also developed increased intraocular pressure (IOP) and optic nerve damage, which is an indication of glaucoma — a second-leading cause of blindness after cataract surgery.”

Glaucoma is traditionally viewed as a genetic and age-related disease, and until recently wasn’t linked to an infection during pregnancy. Singh’s team will investigate how the Zika virus damages the trabecular meshwork (TM) cells that regulate the flow of aqueous eyefluid, which ultimately regulates IOP and leads to the development of glaucoma in infants exposed to the Zika virus in the womb.

“If we can prevent the virus from disrupting TM cell function in the eye while mitigating the impact on the TM tissues that determine IOP, we might be able to prevent the development of glaucoma,” Singh said.

Singh’s research team plans to test the effectiveness of two FDA-approved medications that have been shown in studies to decrease Zika virus infection in the placental cells of pregnant mice infected with Zika virus. The hope is that the offspring will not be born with elevated IOP, thus protecting the newborns from congenital glaucoma development. If successful in mice, Singh hopes these therapies could be tested in humans.

“For the past 15 years, a new infectious disease has been discovered every year, with an outbreak reported on nearly every continent,” Singh said. “Considering the fact that Zika virus transmission exists in more than 84 countries worldwide, it is imperative that we investigate the link between the Zika virus and congenital glaucoma, while also assessing a potential therapy that could lead to therapeutic strategies in the future.”

The grant, from The National Eye Institute (NEI) at the National Institutes of Health (NIH), runs through August 2026.