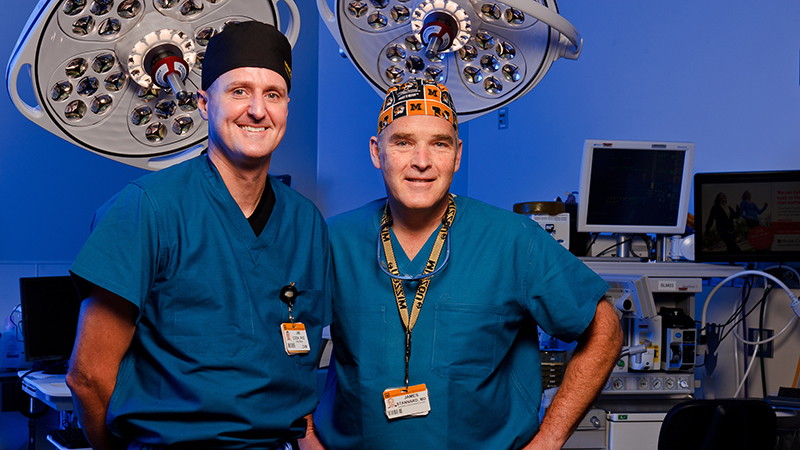 Study Shows 90% of athletes experienced successful outcomes even when they did not return to sports.

Nearly 70% of athletes who underwent osteochondral allograft (OCA) transplantation in the knee returned to their preinjury level of sport within 16 to 24 months after surgery according to a new study from the University of Missouri School of Medicine, MU Health Care and the Mizzou BioJoint® Center at the Missouri Orthopaedic Institute.

“We examined outcomes for athletes who underwent either large single-surface, multi-surface or bi-polar OCA transplantation in the knee using shell grafts,” said senior author James P. Stannard, MD the Hansjörg Wyss Distinguished Chair in Orthopaedic Surgery at the MU School of Medicine. “We hypothesized that elite and competitive athletes would return to their preinjury level of sport at a significantly higher proportion when compared to recreational athletes.”

Stannard and co-author James Cook, DVM, PhD, William & Kathryn Allen Distinguished Chair in Orthopaedic Surgery and director of the Mizzou BioJoint Center, examined data from OCA transplantation cases performed between June 2015 and March 2018 that involved 37 athletes who underwent this specialized surgical procedure for injury or overuse-related cartilage damage in the knee. They found 25 of the patients had returned to sports, with 17 returning to the same or higher level of sport compared with their preinjury level including elite unit military and competitive athletes returning at a significantly higher proportion (100% and 75%, respectively) than recreational athletes. The median time to return to sport was 16 months after OCA transplantation.

“In our study, the majority of high school athletes returned to the same or higher level of sport achieved before injury while recreational athletes only had about a 30% chance of return to the same or higher level sport achieved before injury,” Cook said. “While these realistic expectations for returning to sport must be communicated to patients who are considering OCA transplantation to treat their knee problems, it is important to note that these athletes consistently experienced significant and clinically meaningful improvements in pain, function, physical health and mobility regardless of whether they return to sport or not.”

Researchers also discovered that adherence with prescribed rehabilitation significantly reduced the likelihood for revision surgery or failure after OCA transplantation.

In addition to Stannard and Cook, the study authors include colleagues Richard Ma, MD, the Gregory L. and Ann L. Hummel Distinguished Professor in Orthopaedic Surgery; and Kylee Rucinski, MHA, of the Missouri Orthopaedic Institute.

Their study, “Return to Sport After Large Single-Surface, Multisurface, or Bipolar Osteochondral Allograft Transplantation in the Knee Using Shell Grafts,” was recently published in the Orthopaedic Journal of Sports Medicine. Cook declares that he is a patent holder in the Missouri Osteochondral Preservation System (MOPS) that is used in this study and he is a member of the medical board of trustees of the Musculoskeletal Transplant Foundation (MTF) which licenses the MOPS used in the allograft procedures described in the study. Cook and Stannard have received funding from the Department of Defense and MTF related to this line of research.

Before deciding whether a BioJoint procedure is right for them, patients should first discuss with their doctor the risks and benefits of surgery for their condition.