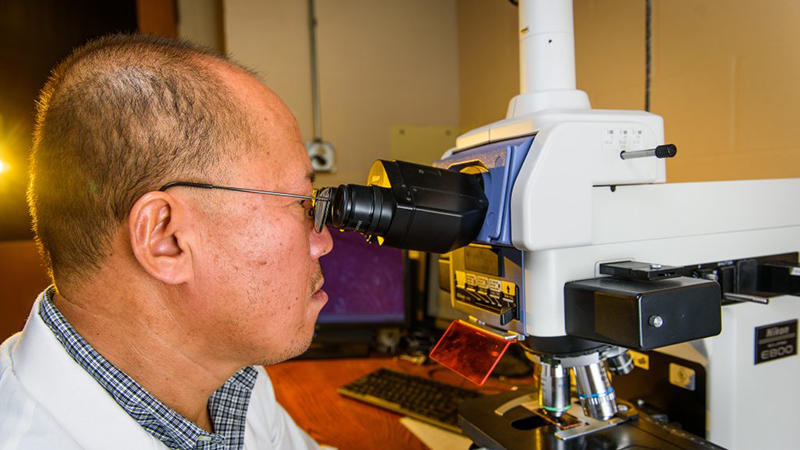 Duan, a Margaret Proctor Mulligan Professor in medical research at the University of Missouri School of Medicine, has spent his entire academic career working toward a cure. He and his team successfully administered an investigational treatment, a gene therapy, to dogs with Duchenne in 2015 in preclinical studies. Now, Duan is passing the torch to clinicians who will use a version of the gene sequence he developed to test its effectiveness in humans with Duchenne.

Muscular dystrophy is caused by gene mutations. Children with Duchenne have a specific gene mutation that interrupts the production of dystrophin, a protein responsible for muscle integrity. Without dystrophin, muscle cells become weak and eventually die. Many children lose the ability to walk. Eventually, muscles responsible for breathing and muscles in the heart stop working.

Through gene therapy, Duan believed he could replace the faulty gene with an engineered, functional gene. Dystrophin is tricky to replace, though, because of its large size. It is an incredibly long gene that encodes for a protein nearly 10 times the size of a typical human protein.

Because of the size, Duan and his team developed a smaller version of the gene called a microdystrophin. The researchers used a common virus not known to cause disease to deliver microdystrophin to muscles.

The sequence Duan used to create the microdystrophin, also known as SGT-001, was licensed by Solid Biosciences, the company that will lead clinical trial efforts.

The adaptive, Phase I/II clinical study will investigate the safety and efficacy of SGT-001 in patients with DMD, according to the Solid Biosciences’ website. The study is expected to begin in late 2017 in the United States.

Although Duan isn’t directly involved in the clinical trials, he continues to examine and refine other potential treatments for Duchenne muscular dystrophy.

“We hope our studies will identify the most promising, most effective treatments – or combination of treatments – to meet the needs of patients at different disease stages,” Duan said. “We also hope our work in the laboratory will help screen out candidate treatments that may be less ideal for patients. SGT- 001 is part of the first generation of gene therapy that will go to the whole body of a patient, and we continue our work to develop the next generation of therapies to help patients with this devastating disease.”