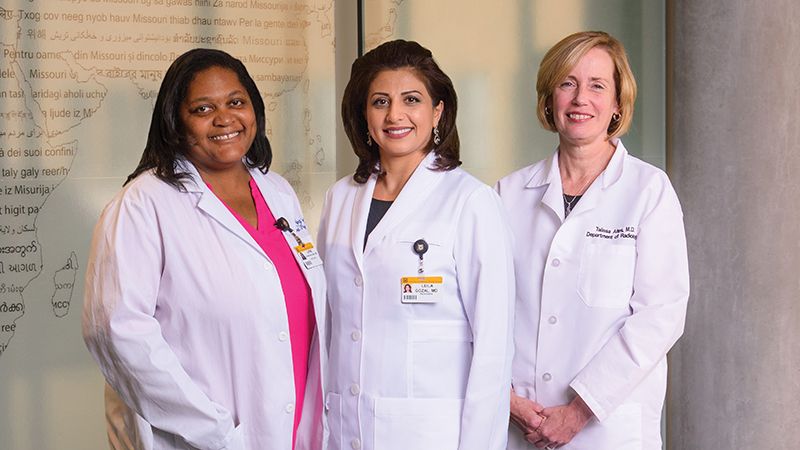 Women move to head of class in leadership roles.

ALTES STEPS OUT OF COMFORT ZONE, INTO LEADERSHIP POSITION

Talissa Altes, MD, thought she had reached her final professional destination at the University of Virginia. She liked and respected her colleagues — some of whom had trained her as a resident — and was fond of the hospital, university and town of Charlottesville.

Altes was the UVA Department of Radiology’s vice chair of research, a position that perfectly suited her skills and personality ... or so she thought.

Yet, when she had a chance to join the University of Missouri as the chair of the Department of Radiology in January 2016, she decided to accept. That step out of her comfort zone worked well for her and the institution.

“She has great administrative skills. She has grown the clinical program, has stabilized the education program and has really jump-started the research in the department. She has turned out to be a wonderful leader,” said Patrick Delafontaine, MD, the dean of the MU School of Medicine.

A native of upstate New York, Altes spent 10 years as an electrical engineer before deciding to get out of the business of building satellites and get into medicine. While attending medical school at the University of Washington, the radiology clinical rounds were her favorites. She enjoyed solving medical mysteries by looking at imaging results, and the technology appealed to her inner engineer.

Her research niche is lung imaging. Because lungs are mostly air, MRIs aren’t very effective in presenting a clear picture of what’s going on inside. However, if a subject breathes in a hyperpolarized gas — helium or xenon — during an MRI scan, a clearer image of the lung emerges. Altes and her team can actually see the gas passing from the lung into the interstitium and then the red blood cells, which gives them clues to understand lung diseases.

Altes said she devotes about 20 percent of her time to research, although after doing the math on all her other obligations, she noted with a laugh that the total far exceeded 100 percent. That’s the life of a department leader whose responsibilities now extend well outside her lab and clinical responsibilities.

A successful medical researcher must have enthusiasm for the subject matter. Leila Kheirandish-Gozal, MD, an international expert on pediatric sleep disorders, is no exception.

“I love sleeping — it’s true,” she said with a laugh. “And as a person who loves sleeping, the science of sleep is sacred to me.”

Kheirandish-Gozal is the director of the MU School of Medicine’s new Child Health Research Institute. She was recruited from the University of Chicago along with her husband, David Gozal, MD, the new chair of the Department of Child Health, to build a productive pediatric research program.

Kheirandish-Gozal comes from a family of physicians, but she has carved a distinct path. As a native of Iran, she was raised speaking both Farsi and English, but when she enrolled in the medical school at the University of Damascus in Syria, she had to learn Arabic. That made the experience challenging while being a “wonderful adventure.” The next stop was the United States.

“I had an immense curiosity for medical cases,” she said. “Reading about others’ research discoveries in medical textbooks, I always felt I’d rather be the one that wrote the book, not the one who just reads it.”

She landed at the University of Louisville, where she met her future husband and found her calling in the study of pediatric sleep disorders and their impact on cognition and the cardiovascular system. She was part of a research team that compared children with obstructive sleep apnea to unaffected peers and found that if they memorized the same material at night, the children with sleep apnea performed worse on the test the next day.

“Our body is like a computer,” Kheirandish-Gozal said. “All the information that is gathered throughout the day, during the deepest stage of sleep gets organized into compartments. Our memory consolidates when we sleep. That’s why a good amount of sleep and a good quality of sleep is extremely important for our day-to-day function.”

For the last decade, one branch of her research has dealt with non-surgical treatments for mild sleep apnea caused by enlarged adenoids and tonsils. Her team found that using a nasal spray containing corticosteroids can shrink those tissues in the upper airway and improve a child’s sleep. Kheirandish-Gozal is the principal investigator of a National Institutes of Health R01 grant titled “Exosomes, Blood Brain Barrier, and Cognitive Function in Pediatric OSA.”

“She has expertise that will not just impact research but really the care of children,” said Patrick Delafontaine, the dean of the MU School of Medicine.

Her enthusiasm for sleeping aside, Kheirandish-Gozal’s real motivation is helping children.

“For me, real meaningful research is where you can actually help somebody,” she said. “As a mother, I’m passionate about my own kids, and I have the same passion for others’ children. I believe in order to have a healthier society, we need to start investing with the young ones.”

When asked to list all the child psychiatry outreach programs she has had a hand in creating or maintaining, Laine Young-Walker, MD ’97, for the sake of brevity, unleashes an acronym storm that leaves few corners of the alphabet untouched. There is SOAR, which includes EC-PBS and CPP, and there is Triple P, SWYC, MO- CPAP and MOCHILD. And that list doesn’t even include her fully spelled-out endeavors, such as the Bridge Program.

Which begs a second question: If her schedule is already packed with her duties as the MU School of Medicine’s associate dean for student programs, chief of the Division of Child and Adolescent Psychiatry and chair of the Department of Psychiatry, why is she creating even more responsibilities?

“The inability to say no is the biggest thing,” Young-Walker said. “The second thing, though, is because I really want to feel like I’ve made an impact. If you look at my programs, they’re about access to child psychiatry or they’re about early intervention. What can we do at an early age to help that parent-child relationship, to help with social-emotional development? Studies show that a more positive, well-adjusted child will enter kindergarten more successful and ready to learn.”

Growing up in Kansas City, Young-Walker knew she wanted to be a doctor and assumed she would be an obstetrician. She was always interested in human behavior, though, and minored in psychology as an undergraduate at MU. In her third year of medical school, Young-Walker realized her heart was in psychiatry.

“If you look at mental health, in general there’s a stigma, but in particular in the African-American culture it’s not seen as valid or real, that it’s all in your head and you should be able to pull yourself up,” she said. “Not a lot of talk about psychiatry in my world growing up. I didn’t even know what a psychiatrist was.”

After graduation and five years of additional training, she went into practice as a child psychiatrist. In 2009, after John Lauriello, MD, took over as the chair of the Department of Psychiatry, he offered her the role as chief of the Division of Child and Adolescent Psychiatry. The responsibilities only grew from there as she climbed the administrative ladder.

Young-Walker said she never expected to plant roots in Columbia. In college, her friends used to joke about never becoming one of the locals they called “CoMos.” She and her husband, Ray, married while she was in medical school and then got busy establishing their careers and raising their children. She never got around to leaving.

Now, Young-Walker is fully invested in the university and committed to helping local children have the best chance to succeed.

“I am officially a CoMo, my husband is a CoMo and my kids are CoMos,” Young-Walker said. “I think it’s a great place to be, and I can’t see being any place else.” 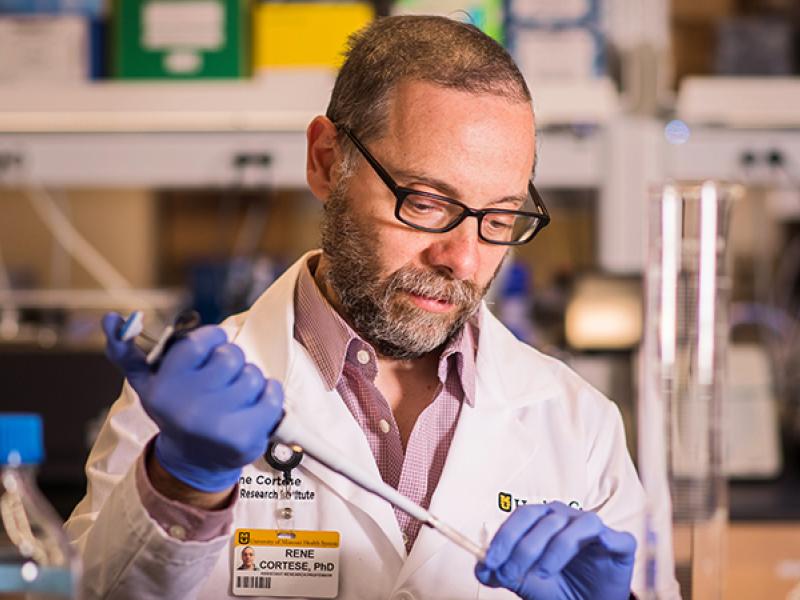 Sleep Apnea Accelerates Aging, but Treatment May Reverse It 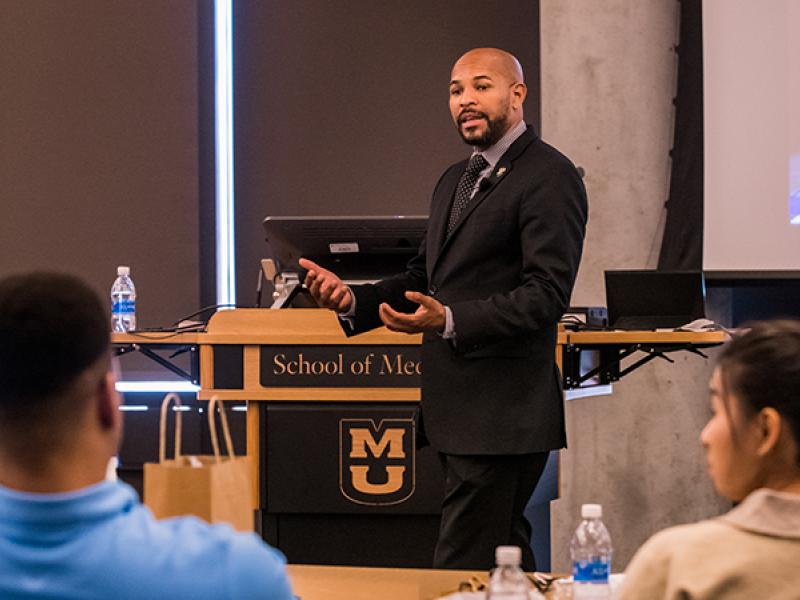 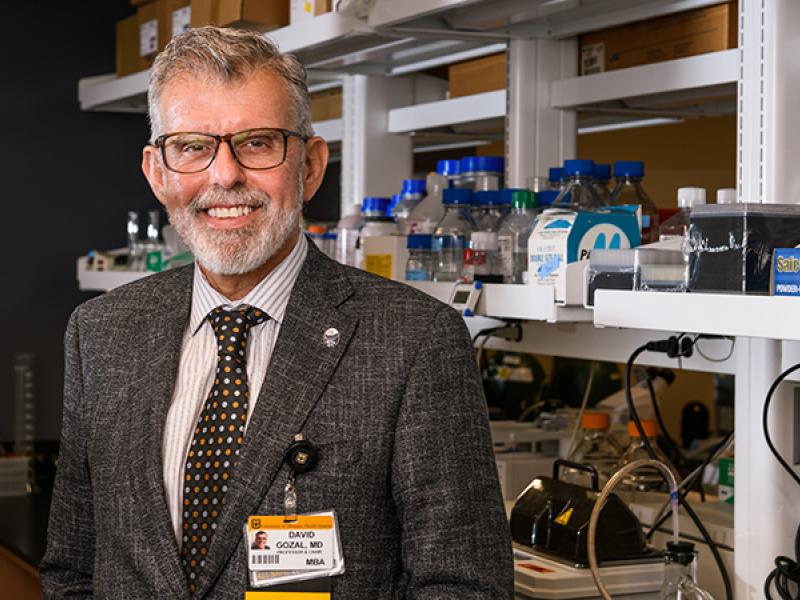 Common Sleep Apnea Treatment May Not Benefit Patients Older than 80