Charles Craig Satterlee, MD, FAAOS, a 1987 Mizzou Orthopaedics graduate, was named chair of the American Academy of Orthopaedic Surgeon’s (AAOS) Board of Specialty Societies (BOS) on March 30, 2020. The BOS serves as an advisory entity to the AAOS Board of Directors and promotes unity and collaboration between specialty societies and the Academy. It brings together the leaders of musculoskeletal societies to address advocacy, continuing medical education, research, and residency and fellowship issues.

Dr. Satterlee serves as president of Orthopaedic Health of Kansas City and specializes in injuries of the shoulder and elbow. He received his medical degree and orthopaedic training from MU and was the senior Anne C. Kane Fellow in shoulder and elbow surgery at the New York-Presbyterian/Columbia University Medical Center.

The UMOA annual meeting was held on April 25, 2019. Old and new business items discussed are presented in the meeting minutes.

After presenting his experiences in “Orthopaedics Overseas: 1985-2017” at the Annual Meeting of the American Society for Surgery of the Hand in San Francisco on September 8, 2017, Dr. Barry Gainor was conferred the inaugural Paul W. Brand Award. Dr. Brand (1914-2003) was a revered author, educator, and master hand surgeon who devoted his life to the care of patients with Hansen`s Disease (leprosy).

Dr. Gainor is a founding member of Health Volunteers Overseas and has volunteered his services on many occasions in St. Lucia and Peru. He served on the HVO Board for 10 years, six of which he was Chair and Chair Emeritus. He has also served as Chair of Orthopaedics Overseas Board. In that capacity, he was very pleased to present Dr. Brand with OO’s Humanitarian Award in 1996, so it was a unique honor to receive the inaugural 2017 ASSH award, Dr. Gainor said.

As past Chairman of the Boards of Orthopaedics Overseas and later Health Volunteers Overseas, Barry says, “Doctors who volunteer service in resource poor countries are the best ambassadors that the USA can send abroad. They dispel myths and dismantle prejudices in a world afflicted with intolerance, disease, and injury. These generous physicians are the best of the best.”

A Note From Dr. Stannard after the Passing of Dr. Allen 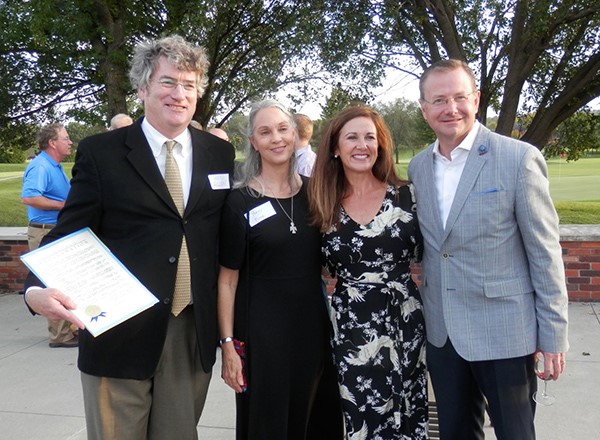 September 14, 2016 — It is with great sadness that we announce the passing of William C. Allen, MD, Professor Emeritus, University of Missouri Department of Orthopaedic Surgery, on Monday, Sept. 12, 2016. The Allen Family will hold a private service at a later date.

Dr. Allen graduated from the University of Chicago School of Medicine, was a resident at Stanford University, completed a biomechanics fellowship at Case Western Reserve University, and served in the US Army Medical Corps. He was board certified by the American Board of Orthopaedic Surgery in 1968.

Coming from the University of Florida in Gainesville, where he served as the Director of the residency program, Dr. Allen joined the faculty at MU in late 1976 as Chief of the Division of Orthopaedic Surgery. He was a much respected, greatly admired, and critical figure in the foundation and history of our department where he served as Chair for 22 years. His focus included biomaterials, biomechanics of the musculoskeletal system, intra-articular meniscal suture techniques, joint replacement, and sports medicine. Dr. Allen was a co-founder of the University of Missouri Orthopaedic Association in 1980 which supports resident research and education and humanitarian activities. During his tenure, he was a founding member of the American Orthopaedic Society for Sports Medicine and served as President of the AOSSM in 1984-1985. He hosted an international sports medicine symposium in 1985 at MU featuring the AOSSM European Traveling Sports Medicine Fellows. The AOSSM honored Dr. Allen as the Godfather of the American Orthopaedic Society for Sports Medicine Pacific Rim Traveling Fellows in 1997 and as Mr. Sports Medicine in 2004. He was also one of the organizers of the Mid-America Orthopaedic Association and served as president of the MAOA in 1991-1992. He was affectionately called the “Czar of Education” by the MAOA board members because of his love of education and of teaching residents.

Dr. Allen has been honored with numerous awards and honorary memberships through the years, and he generously established an annual lectureship in 1996. Dr. Jimi Cook, our department’s research director, has been graciously endowed by Dr. Allen since 2004 and is the William & Kathryn Allen Distinguished Professor in Orthopaedic Surgery.

Dr. Allen will be greatly missed by our department. He will be remembered for his leadership, exemplary service and dedication to patient care.